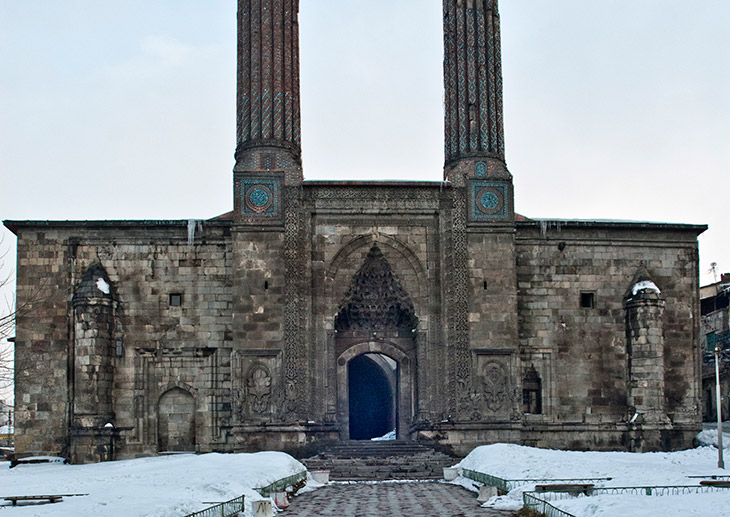 Fly to Erzurum at the Best Prices

Erzurum, the city of the Dadas, the biggest city of the Eastern Anatolia! In Erzurum whose history goes back to 4900 B.C., numerous civilizations were born, left their marks, and ended. In the city that was under the Ottoman rule from 1514 to the establishment of the republic, there are numerous Ottoman era buildings naturally. The fact that one of the two congresses that were the milestones of our War of Independence was held in this city in 1919 underlines the city's sentimental importance for Turkey. Renowned for its buildings from the Seljuk, Ottoman, and Republic eras such as Twin Minaret Madrasa, Erzurum Fortress, Three Cupolas, Rustem Pasha Covered Bazaar (a.k.a Tashan), Coppersmith Mosque, Caferiye Mosque, Ibrahim Pasha Mosque, Cobandede Bridge, Hasankale, Ispir Fortress, Mother Mary Church, Oltu Fortress, Osvank Church, Tortum Fortress, Yusuf Ziya Mansion, and Aziziye Bastion, Erzurum attracts numerous tourists' attention for the architecture of its houses as well. The first thing coming to mind about Erzurum is biting sugar and tea. However, Ayranasi Soup, Kesme Soup, Ciris, Hingel, Tatar Pastry, Mumbar, Water Pastry, Stuffed Esikili, Stuffed Chard Leaves, and Hasil are also some of the beloved local tastes.

Erzurum that tops the list of the most crowded cities of the Eastern Anatolia Region has still been preserving the heritage of numerous civilizations it had hosted. This city, which has a harsh climate due to its geographical location, is a brand in winter tourism and winter sports in Turkey.

In addition to skiing, cirit (horseback javelin throw) is also another sports branch played professionally and followed enthusiastically in Erzurum. Erzurum, which is visited by the winter sports practitioners and fans frequently, is also a city flooded by numerous domestic and foreign tourists for its nature, deep-rooted history, local tastes, and traditional handcrafts.

How to go to the City Center from Erzurum Airport?

You can make a private travel by benefiting from the options of renting a car meeting your needs from the car rental offices available at Erzurum Airport. By renting a car, you can go to the city center and anywhere in the city and the neighboring cities. You can ensure that your car is prepared in advance by booking one online before arriving at Erzurum Airport where you can find the offices of numerous car rental firms, and when you have completed your travels, you can deliver your vehicle to the car rental office from which you have received service.

What to eat in Erzurum?

The centuries-old Erzurum culture generously offers its riches to us with its meals as well. "Cag kebab” made of goat or lamb meat is one of the most renowned meals of Erzurum. Marinated in a special recipe for 24 hours, the meat pieces are skewered like spinning kebab but cooked horizontally.

Erzurum’s most renowned dessert is “stuffed kataifi roll". The stuffed kataifi roll prepared by wrapping walnuts or pistachios with fresh kataifi, is dipped into egg and fried in boiling oil. Remember to taste this delicious syrupy dessert after cag kebab.

"Ayran asi", which you can see on the tables especially throughout the entire Ramadan month, is one of the most renowned soups of Erzurum. This soup is made by using buttermilk or yogurt.

The pastry called “hingel” in Erzurum is known as "manti" across the country. It has two types: with or without water. In Erzurum where hundreds of types of plants grow, the vegetable dish varieties are also rather rich as well as the pastries and meat dishes. “Ciris pancari", "cortutu pancari", "turnip cirtmasi", "cec pancari", "casir kavurmasi", and "borani" are some of them.

Where to stay in Erzurum?

In Erzurum, numerous accommodation alternatives for different budgets both in the city center and near the ski center await you. If you want to have a holiday in Palandoken Ski Center, numerous accommodation facilities ranging from 4 or 5 star luxurious hotels to boutique hotels or one-day facilities await you in Palandoken in all seasons of the year.

For those who want to have their holidays in spas, there are thermal facilities in the region. In these facilities, you can use the healing waters in the bathroom of your room, and benefit from the pools.